Letting It All Go

For four years I was an Assemblies of God minister and a monk with the Brothers and Sisters of Charity at the Little Portion Hermitage. This is an excerpt from my book,Taking Off My Comfortable Clothes: Removing Religion to Find Relationship. 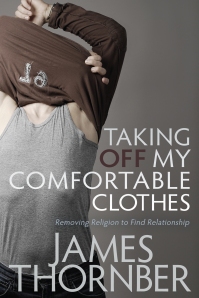 One of the interesting facets of traveling around the country with the members of the Little Portion was the discovery that different parishes had different tolerance levels for Assemblies of God monks teaching in their church. My unique situation was welcomed with open arms in many cities, but this was not the case in a visit to Dodge City, Kansas. There the priest asked me not to tell the congregation that I was not a Catholic. I was ready for this, because it was not an unusual request. It fell under the heading, “No one can pick on my baby brother but me.”

Too often, we will tolerate any amount of disagreement or criticism as long as it comes from within our ranks. However, if that criticism comes from an outsider, then we often find it unacceptable. For instance, I can tell Jewish jokes all I want because my mom’s family is Jewish. But if those same jokes are told by anyone else, then people start screaming antisemitism. The same goes for jokes pertaining to religion.

However, I also respect the pastor of a church who knows his people well enough to understand their limitations. I was always obedient to the wishes of the priests who invited us to minister. To do anything less would be to dishonor God’s appointed leadership.

I preached in Dodge City three nights in a row and never mentioned I was not a Catholic and there was a wonderful response. But one humorous encounter occurred after the last night I taught. A couple approached me, a bit cautiously I might add, and asked if they could speak with me.

“After listening to you, we’ve come to a conclusion,” the husband said. “Either you are not a Catholic, or you are a recent convert to Catholicism.”

I laughed and said, “Why would you say that?” END_OF_DOCUMENT_TOKEN_TO_BE_REPLACED