What Is That Ringing In My Ears?

By faith Abraham, when called to go to a place he would later receive as his inheritance, obeyed and went, even though he did not know where he was going. Hebrews 11:8 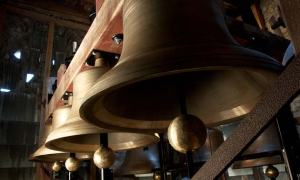 Abraham’s patient obedience is starting to irk me. He did not own any land, nor had he personally received any as an inheritance, and so Abraham lived as a tent dwelling nomad, moving from place to place. He waited twenty-five years to see the son God promised him, and never really possessed the land God said his children would inherit.

I keep wondering how Abraham could remain so patient in his obedience. We live in a society that grows impatient if it takes too long for the coffee to brew in the morning, much less wait four hundred years for escrow to close on our new property! Still, Abraham went to Canaan possessing nothing but faith.

He had no job, no prospects, no forwarding address, no inheritance from his family, and of course no children to give the inheritance to even if he had one. With all that going for him, Abraham “when called . . . obeyed and went” (vs. 8), because his faith was certain of what he did not see (Heb. 11:1) and apparently he didn’t even give it much thought. The phrase “when called” translated an action indicating a quick response. In other words, while the call of God was still ringing in his ears, Abraham was packing his bags and moving west.

When was the last time I obeyed the word of God while the sound of His instructions was still ringing in my ears? Too often, I’ve been guilty of telling God what I think He really meant to say, hoping that He would understand my viewpoint and change His instructions to meet my faith where I am comfortable. However, by the time I get through arguing a point with God, I sometimes forget what the original instructions were, and then of course I must start all over again.

I know I’m not the only one guilty of this. I’ve met other Christians who are guilty of giving obedient lip service to God, but when it comes to doing what they say they will do, they fall short of the mark. Jesus knew this to be the case for many of us and so He told a parable of two sons (Matt. 21:28-32), with one saying to his father, “I will, sir,” but in the end did not obey. The true children of Abraham, also known as disciples of Christ, obey in word and deed. In this spirit, Abraham believed God and quickly obeyed. Hebrews 5:9 reminds us that Jesus is the “source of eternal salvation for all who obey him.” It is one thing to believe God’s directives, and quite another to obey them.

But there have been times when I have jumped up and obeyed at the quickest possible moment, and the joy from that obedience is enough to make me say, “Ask me to do something else Lord, this is great!” There is a joy in faithful obedience to God that one can find nowhere else.

Does this mean that every time I quickly obey I will like the results? No, but my limited understanding of “good results” isn’t really the point, is it? God calls me to obey and leave the results up to Him. By releasing the controls, God is able to work in a way that is beyond my understanding, setting me free from the burden of having to steer my own life. I believe that God’s vantage point gives Him a better view of my horizon, so I trust Him to steer me in the direction that I need to go.

So, what is that ringing in my ears?