Giving it Back to God

“O LORD of Heaven’s Armies, if you will look upon my sorrow and answer my prayer and give me a son, then I will give him back to you.” – 1 Samuel 1:11 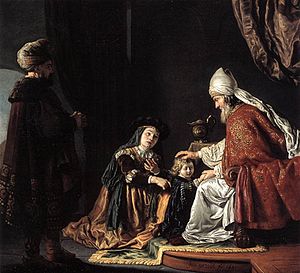 This prayer of Hannah, the mother of Samuel, is a big challenge to me because she is the picture of someone who wants something all her life, and when she gets it, she gives it away. Who does that? Not me, apparently, which is why God is on my case about this story.

Hannah is childless, which is a point of great fun and taunting by her family, but she bears it in stride. Then she tells the Lord that if He gives her a son, she’ll dedicate him back to God. And, unlike the guy on the plane that is going down who tells the Lord He’ll give him half his fortune if he survives, and then after it lands tells God if He wants it He can come get it, Hannah actually follows up on her promise.

Furthermore, Hannah doesn’t give up Samuel immediately. She actually waits until she weans Samuel, probably two or three years (1:26), before she takes him to Shiloh and leaves him there for Eli to raise.  If I was going to give something big to the Lord, like my firstborn son, I’d try to do it as quickly and painlessly as possible, the way Abraham got up and obeyed when told to sacrifice Isaac. I wouldn’t keep my promise around and get attached to it. But this is exactly what Hannah does. END_OF_DOCUMENT_TOKEN_TO_BE_REPLACED