I Refuse To Be A Dittohead

And I will give you shepherds after my own heart, who will feed you with knowledge and understanding. – Jeremiah 3:15 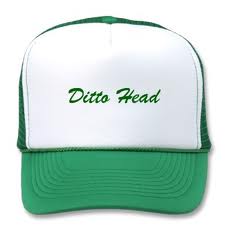 I did not grow up wanting to be a pastor. I sort of stumbled into it by default. I’ve been told from my early teen years that I was a good teacher and I’ve developed that skill over the years. But I didn’t want to be a pastor, just a teacher.

However, this was the problem I encountered with not wanting to be a pastor: in order to be a teacher in a church, too often I was forced to fit into the mold of the senior pastor. He wanted to recreate me in his image, make me be like him. He wanted me to think like him, have his sense of humor and his manner of speech. Too often they wanted a “mini-me.” And since I wasn’t always willing to be like him, my teaching opportunities were infrequent.

The Lord says in Jeremiah 3:15 that He will give people shepherds (pastors) after His own heart. If this is so, then why did most pastors I served with (read that, “under”) want to make me in the image of their heart at the expense of God’s heart? Why did I have to do an imitation of them in order to do what God called me to do? I finally determined that to do what I felt called by God to do I had to be a pastor, a shepherd and leader, after God’s own heart. I couldn’t do an imitation of a pastor still living in the 1970’s. I had to be who God called me to be.

I’ve been reading Eugene Peterson’s new memoir The Pastor. In this book he quotes Baron Friedrich von Hügel who said “there are no dittos in souls.” When I read that I wanted to jump up and shout, “That’s it! I don’t have to be like anyone else. I just need to follow the heart of God!” END_OF_DOCUMENT_TOKEN_TO_BE_REPLACED