Would I Worship Or Would I Whine? 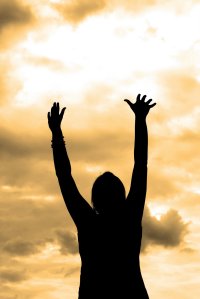 A few weeks ago a pastor in my town brought this passage to my attention. It is the story of Jesus leaving Galilee and going north into Tyre and Sidon, which was Gentile territory. A woman who lived there came to Him and pleaded for Jesus to heal her daughter, who was tormented by a demon. As a response to this request, Jesus remained silent.

Today, silence is a most hated concept. With iPods, the internet, radio and television blaring everywhere we go, we’ve learned to distrust the sound of silence. Silence is wrong. Silence means something is broke. Silence makes us wonder if we’re still alive if all we hear is our own breathing.

Add to that silence the fact the people hanging out with Jesus urge Him to send her away and you have an emotional breakdown in the making. But she doesn’t go away. She just stands there and waits for the Son of David to answer her request. And when Jesus does speak, it is not as the meek and mild Jesus we sing about in church.

“I was sent only to help God’s lost sheep—the people of Israel,” He says. Great. Not only is Jesus treating her with silence, now He says he wasn’t sent for her. Apparently, there are people whose needs are greater or better or more deserving than a mother with a child possessed by a demon.

At this point in the story, I’d be ready to tell the Son of David what He can do with His Messiah complex. I mean, if God is going to be that callused as to tell me that others are more deserving of His mercy and grace, then it’s time to find another god.

But what this woman does next just astounds me. Verse 25 says, “But she came and worshiped him.” Is that what I would do? Would I worship God after He has been silent, after the church folk have suggested He send me away and finally after God says He’s not here for me? I’d be more tempted to whine about how life is all against me than to worship a God who intends to ignore me.

But now this woman challenges me again, for in her humility she acknowledges that everything Jesus said was true. She was not an Israelite, Jesus was not here for her first, and she shouldn’t get the meat from the table. All true. It is only the proud people like me who think Jesus’ arrival on earth was all about meeting my personal needs according to my personal timing. When will I learn that even the scraps from God’s table are richer fare than any five star meal the world has to offer? Isn’t it better to be a dog in God’s kingdom than a king in the realm of Satan? This woman has seen how the demons treat people like her daughter, and she knows there’s more compassion in the crumbs of God than in the lies of the loftiest fallen angel.

Now, let’s look at this passage from another angle. Yes, Jesus was silent, but He was there. He was in her presence and He didn’t leave. In fact, He came to her town; she didn’t travel to him. There is always hope when God is present.

Next, we see that silence isn’t a refusal. He was silent but He didn’t say no. In silence there also is hope. Don’t let the silence of God or the quick answers of the critics send you away from what you need most.

When Jesus replied He was only sent to the lost sheep of Israel, there is still hope. For if that was true, what was Jesus doing in Gentile territory? Sometimes we think God is only going to help the good people who are worthy. But this scene reminds us that God came to save the world, because the entire world is as unworthy as this Gentile woman. God is increasing her faith – and that is something we could all use a bit more of.

Finally, when God tells me the truth about who I am, I need to remember that even a mutt like me has a place at the

Banquet table of God. Sure, life may not always go as I’d like it, but Jesus has entered the room and where He is, there is hope.