Praying The Lord’s Name In Vain

Ex. 20:7-“You must not misuse the name of the LORD your God. The LORD will not let you go unpunished if you misuse his name” (NLT). 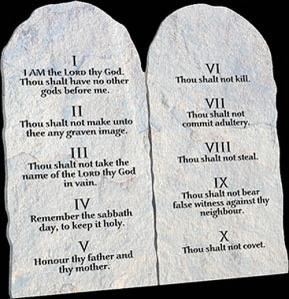 Just for the fun of it, I’ve been reading the Pentateuch, the first five books of the Old Covenant. I’ve been in Exodus the past few days, zooming right along and having a good time, right up until I got to Ex. 20:7, the third of the Ten Commandments. This one stopped me in my tracks. Like many of us, I’ve memorized this verse from the King James Version, which says, “Thou shalt not take the name of the LORD thy God in vain.” This commandment extends the idea of the second commandment, for just as God forbids us to show disrespect to Him by making a god out of something that is not God, it is also a disgrace to use His Name for no legitimate or valid reason.

Until now, I’ve mostly thought of taking the Lord’s name is vain as cursing. When I was barely a teenager, I’d often get frustrated and say, “Jeee-sus Chrii-st,” as if it was His fault I wasn’t getting my way. My dad heard me say that once and he shot me a look that has stayed with me for 35 years, and I’ve (mostly) succeeded in not saying it again.

Other times, I’ve heard people vainly use His name to express surprise or disappointment, or even fill in the gaps in prayer. This last one I find especially irritating. END_OF_DOCUMENT_TOKEN_TO_BE_REPLACED